In this article we will analyze the most popular advice you have ever heard. It will be unexpected but divinely beneficial! Let’s begin?

Immanuel Kant was a famous philosopher. If he were still alive, seeing the movie “Spider-Man: Far from Home,” he would shout, “What a good movie!”.

Why would Immanuel Kant like Spider-Man? You see, Kant was a staunch enemy of hedonism. He loved to promote anti-synthetic values ​​in his writings and thought people waste their lives devoting it solely to entertainment. He believed that there are many more important works, some of which are mentioned in the movie “Spider-Man: Far from Home.” To understand the essence, I propose fast-forwarding to a scene in the film.

So let’s load this movie and hit play. Skip the headline, the Marvel logo… Prrrrr… Let’s skip over the beginning. At 57:47, there’s a scene taking place in a bar. In front of the camera, you see two heroes—Peter Parker (Spider-Man) and the insidious hero, Mysterio. Mysterio is a snake-like contender from the story of Adam and Eve. Pretending to be a good man, Mysterio asks, “Peter, answer what do you want the most? Seriously, what do you really want?”

When we humans receive similar questions, we jump for joy. We feel great because someone has finally taken care of our dreams! Purrr! We think the person asking similar questions will help us to solve our problems and discover happiness. But we are wrong, as the answers to similar questions point us in the wrong direction. You don’t believe me? Then let’s go back to the same scene.

Part three: Damn, how good it is to kiss at the Eiffel Tower!

When Mysterio asked Peter a sweet question about his desires, Peter sang like a nightingale, “I want a relationship, a kiss at the Eiffel Tower.”

After talking with all his desires on the table, Peter realizes how important it is to pursue all these forms of entertainment, so he decides to let go of the responsibility, the burden that was dragging him down. After all, isn’t the main thing achieving what you want? It’s all about kissing and having fun? To get rid of the burden, Peter offers the interlocutor to take over his duties. He gives him the codes of the combat system on which the survival of humanity depends. He gives him everything that once made him a hero.

And then, leaving behind responsibility, Peter exits the bar. Walking down the street, he is satisfied with his choice because he knows that many people would support him. After all, nowadays it is fashionable to avoid responsibility. Avoiding responsibility has taken root in culture; that’s why tons of quotes can be found on the internet that encourages one to focus on one’s desires only.

Similar sentences would be great for a Snickers or Coca Cola. 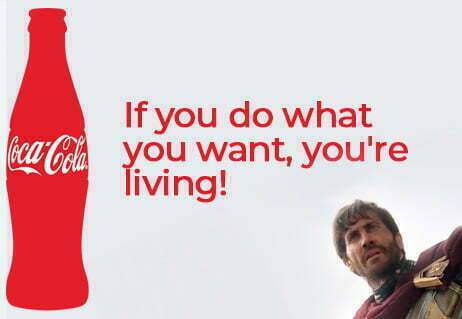 Nonetheless, Coca Cola created a shorter slogan: Open Happiness. Similar sentences could apply to many products aimed to end up in the belly or other organ, so L’Oréal has a great slogan: Because You’re Worth It. Sure, you’re worthy of L’Oréal, but what else are you worthy of? What’s your life worth? What are your choices worth? M?

The people who suggest you pursue what you desire to resemble Mysterio, the evil man in Spider-Man, as they distract you from your real mission. They take jobs away from you that would you otherwise add value!Pay attention to the quote, “If you do what you need, you’re surviving. If you do what you want, you’re living!” Would this quote fit Mother Teresa? After all, she didn’t always do what she wanted; she was doing what had to be done! Does this quote apply to the soldiers who fought for your country?

Would this quote be appropriate for a man who saved a girl who would otherwise be struck down by a train? The works mentioned are worthy even though they’re not interesting. Because a firefighter does what he has to do, not what he wants to do; he doesn’t want to go to that damn fire, but he has to! Or perhaps I’m wrong, and this quote is correct? I wonder what the man named Ketan Jorawadia would say about this quote. 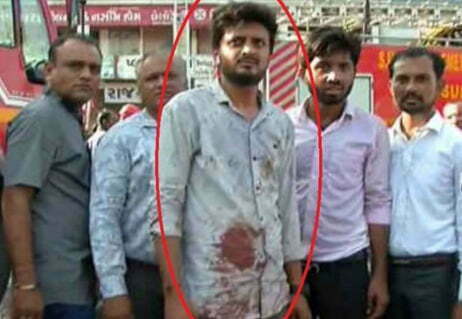 Ketan Jorawadia saved two girls from a raging fire. The fire department arrived after 40-45 minutes. I’m 100% sure that he wasn’t thinking about his own desires while doing this job. When he was saving people, his personal desires lay in a drawer where they belonged. But others stood and stared at the fire… And we all know what they were thinking… Eh… Few understand what I mean…

To understand this, you have to experience it on your own skin, as Peter Parker did in the movie about Spiderman. As you understand, we will come back to the movie in a moment.

Yes, what happened next … Let’s skip a few scenes …

As it’s also encoded in your DNA, therefore, just entertainment is not enough for you either. So, no matter how many lovable activities you do, you will miss something that gives life greatness, dignity, importance. Without these things, you will feel insignificant and small. Unfortunately, dignity and greatness are not easy to achieve. These things must be earned through pain and devotion. So, I tell you again, it’s not a good idea to follow only your passion and nothing more…

“Alex, what are you talking about here? I want to have many women and a few hundred new cars!” Dan Bilzerian will say.
I have a question for him.

Dan Bilzerian… Is it clever to follow only your passion or maybe… maybe there’s something more???

Get me right; I don’t want to interrupt your dreams. Therefore, buy cars! Swim in a pool with ten girls at once, if you want, but don’t forget about your value, which can only increase with hard, boring, but meaningful jobs. And, more often, ask yourself not, “what can I do to be useful to people?”. So stick it to your forehead, Dan; it’s important to focus not only on those activities you like and desire.

Focus on the jobs you need to become someone greater. I would like you to say to yourself in your old age, “Yes, there were times when I was only with girls and cars, but mostly I’m happy because I realized on time that most of the fun brings not entertainment, but…”

How to Change Your Life in 30 Days: commetment

Why You Just Shouldn’t Constantly Strive for Happiness

Is it good to strive for happiness?...

What does it mean to be happy with yourself, and how to reach joy?