I’m sure everyone has dealt with pseudo-heroes.

A pseudo-hero is one who wants to make fun of you, your friends, family members, but who gets angry when he himself is being mocked or when his friends experience mocking.

I’m talking about people who can swear and blame but who can’t praise.

Why do I call bullies pseudo-heroes? I will give you five reasons.

1. They think they are saving the world, which is not true.

Who saw the movie “Spider-Man”? Realizing he was different, Spider-Man tried to help humankind. He saw a thief who was attempting to steal a bicycle. Trying to save the bike, he sprayed the thief with sticky threads. It turned out that the robber was the owner of the bike. As you can see, good intentions sometimes turn sour. So Spider-Man had to rethink his actions. He accepted the fact that he was not a hero.

Spider-Man had to make a great effort to change. Unfortunately, in reality, few people see their mistakes; that’s why we are surrounded by so many pseudo-heroes. Unaware of true heroism, they shoot with the lightest weapons—angry comments, believing that it will motivate their victims to do good things. But it is an illusion.

Research shows that nasty comments increase suicide rates and anxiety, not motivation. Of course, pseudo-heroes don’t have time for research, so with great music from Batman, today they will share millions of “world-saving” comments like this: “Hey, ******, your creation is crap. You are stupid. Shame on you!”

“Why do they behave this way?” I’ll answer!

a. They don’t know how much damage the angry comments can do. They would have acted differently if they had found themselves in a family where someone committed suicide due to depression under the influence of someone else’s criticism. Besides, they do not know that humiliating criticism damages the country’s image. Or am I wrong? Then why do foreigners not call our country the friendliest country with the most compassionate people?

b. They have problems with values. They focus on news, updates, not the fundamental problem that people can’t communicate with each other in the right way.

c. They cannot distinguish what distinguishes a hero from a pseudo-hero. The issues are in culture and in education. Everything will be different if people read books like “Morality of the 21st Century.”

A real hero will never kiss his reflection in the mirror. Unfortunately, pseudo-heroes do the opposite. They like to shower themselves with medals. They love to measure the digital crown. “Wow, just look at me; I am so amazing, and all others are fools!”

I’ve met people who are interested in etiquette. These people will never utter bad words. Those who know etiquette can express their opinions in a polite, intelligent and sensible way. Oh yeah, a real hero is always wiser. Superhero movies confirm this. And because bullers don’t know the etiquette, they act like gremlins.

Remember those horrific creatures from the film? 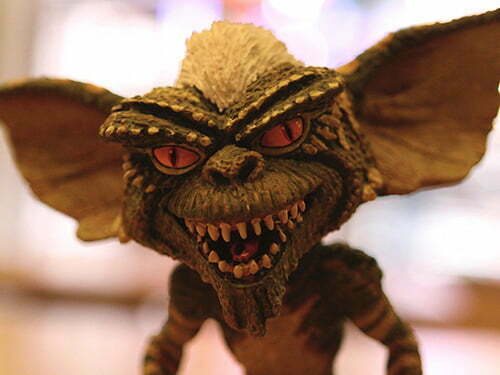 Look at the ears. They hear everything. Since gremlins love to create shows, they gain many followers online over time; become influencers.

4. They cannot admit their mistakes.

There is nothing to say here. Everyone knows real heroes know how to admit their mistakes. The pseudo-heroes don’t; it’s the hunger for wisdom.

5. They are cowards. Realizing that they were wrong, they quickly hide under a comedian’s umbrella.

It is interesting to see a pseudo-hero who, after receiving humiliating criticism (for improperly mocking his victim), runs hiding under a comedian’s umbrella, shouting: “Ladies and gentlemeeeeeeeen, you didn’t understand me correctly, it was a joke! Why react to jokes so seriously? I was joking about you!”

6. They need recognition and popularity.

Imagine you are walking across the lake. You notice a drowning man. You will help him. Pseudo-heroes behave differently. They think, “What do I need this for?” After all, this is a good material for a message on Facebook or YouTube!” He takes out the phone. This is how pseudo-heroes behave when they see a person drowning in problems. After all, drowning is possible not only in the water, right? You can soak in depression, disaster, debt, and so on.

Do you understand now why only a few are willing to help you? Because we are surrounded by pseudo-heroes for whom popularity is a priority. And since the easiest path to popularity is to belittle others, popularity fans only talk about others’ mistakes. To make others believe them, they learn NLP techniques. Therefore, when faced with such a person, you will feel a lot of pressure because they have devoted a lot of science to humiliate you successfully. Consequently, I am here to advise you.

How to deal with online criticism, how to respond to angry comments, and do you have to respond?

Picture a life situation—the moment you open a window (I’m talking about a digital window to the internet or Facebook) where you see the furious pseudo-critic’s art—a comment: “You are a mushroom, man! Ha ha!!! Maaaaaashrooooom!”

The text is small, but the effect has the size of an elephant.

You feel the fire, a hurricane, a rush of emotions, paralyzing logical thinking.

And when logical thinking is asleep, the world is lit in gray, so you only see a few possibilities:

a) Hit back by answering: “You are a mushroom yourself!”
b) Send them to hell.
c) Get sad and lower your hands.
b) Take advantage of Alex Monaco’s offer.

In the face of humiliating criticism, calm down.

Oh yes, in the face of an emotional thief, inhale some air. Relax your shoulders. Smile. Remember your goals. Think about the birds and the blue sea. Let the negative emotions fly away with little birds, with lots of small birds. Inhale some air again and ask yourself a few questions.

Do you want to be happy and prosperous, or would you be better off taking your time to take revenge on the pseudo-hero?

What is more important to you: majestic goals or the will to prove to the pseudo-hero that you’re super smart? If you want to look clever, then write: “You say I’m a mushroom… It hurts to hear this, so because your criticism gnaws at me, it means that you’re a worm.”

You can leave a message: “I love mushrooms. I tried to buy some in the fall, but people buy them all up quickly.”

But if I were you, I would strive to look at this situation from a different angle. If you come up with an excuse, you will prove that you are trying to justify yourself, which will mean you are weak. If you insist on showing the other person they are wrong, you will prove that you are a cocky person who, like pseudo-heroes, does everything to be right. On the other hand, if you don’t write back, the other party will either think you’re trying to avoid a collision or have nothing to answer, which means you’re scared. So the best thing you can do is shock them.

Such an answer will shock. This comment tells the bully that you’ve seen his “art.” This way, he will realize that you are hard to break, and the next time he will have no reason to touch you. Usually, pseudo-heroes stick to those who are easily influenced.

You can write: “Thank you for your opinion. I’m busy right now, and when I have time, I’ll try to answer.”

Such answers will give you many benefits: First, you will have plenty of time to think about what to do. You can write to me, ask me how to act. On the other hand, you didn’t promise that you would answer, that you would write back. Who knows, maybe you don’t have that much time?

Oh yes, after leaving a similar comment, pour some hot water into the tub. Lie down. Listen to your favorite music.

After ten minutes, you’ll realize that it’s not worth paying attention to the pseudo-hero.

In a few days, you are unlikely to remember their ill-intentioned feedback. In the blink of an eye, you will forget the havoc caused by one of the unfortunate Gremlins.

Attention: There is always a chance that such a comment will trigger a reaction, but the probability is less than 1 percent.

On the other hand, you can act like one of my friends—the most famous poet on the internet.

We once met in a café. We talked about anti-constructive criticism. I remember how he shared: “I’m blocking all my critics without warning. I try to focus only on creativity. It is essential.”

He explained that trolls who do not know constructive criticism have a clear purpose—consisting of stopping your path to success—he added: “Alex, they are jealous, so they want to hurt the lucky ones. I am lucky, so they want to distract me from creativity. They won’t. Because I’m deleting the damn critics.”

Do you need to block bullers, attackers, critics?

Speaking of me, I rarely block attackers. I find it interesting to analyze them, even if they’re not pouring shovelfuls of dirt into buckets, but rather…

I have thicker skin.

But I don’t know how thick your skin is, reader.

I don’t know what you plan to do when you get attacked by one or two pseudo heroes.

Of course, there is no one solution / one answer for everyone. It all depends on the situation. For example, it is challenging to communicate with the critic in a real-time face to face. In this case, it is impossible to predict everything. Therefore, it makes no sense to impose one sentence on all attackers. It’s about your mindset. You have to change it. After all, if you become a 100% self-confident person who doesn’t have to prove anything to others, it will all work out. The main thing is not to be puffed up, not to play the hero. After all, anyone who tries to win the title of hero becomes an anti-hero.